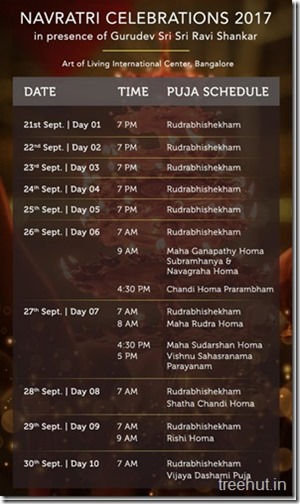 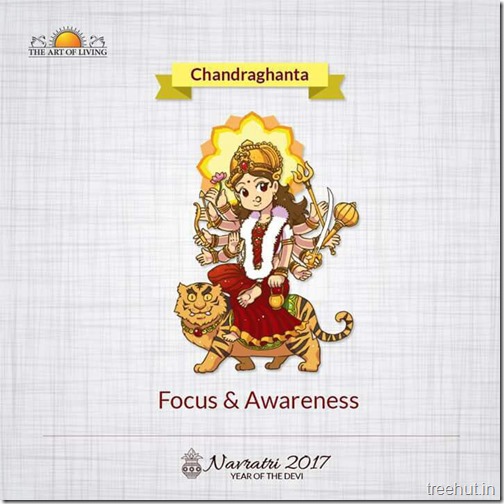 The third form of the Mother Divine is Chandraghanta.

What does the word Chandraghanta mean?

Chandra (Moon) means the mind. The mind keeps having its ups and downs. Usually we fight with our own mind. Negative thoughts such as jealousy, hatred, etc. come in the mind and one starts struggling to get rid of them, but it does not happen. You cannot get rid of your mind. Running away from your mind does not help. The mind is like your shadow.

We become dejected and restless the moment our mind is gripped by any negative feeling. We try to wash away all these things from our mind by doing various techniques, but it works only for a short time. After a while, the mind comes back to square one! Do not struggle to get rid of that.

Chandra also signifies the various feelings or shades of emotions and thoughts (similar to the different phases of the waxing and waning moon).

Ghanta means a bell from which only one kind of sound arises. Do you ever hear multiple sounds from a bell? No matter how you play it, only one kind of sound comes from the bell. In the same way, when the mind that is scattered and entangled in different thoughts and emotions gets consolidated and established at one point (in the Divine), then it gives rise to the Divine energy within us which becomes one-pointed and rises upwards. This is what is meant by Chandraghanta. Her name literally means (The bell of the moon).

It means that state where the scattered mind becomes steady and consolidated towards one thing only. Do not run away from the mind, for the mind is also a form and manifestation of the Mother Divine. The Mother Divine is present even as sorrow, misery, hunger, and peace as well. The essence here is to take everything together - whether harmonious or unpleasant - as a collective whole, bringing all thoughts, emotions and sounds as one Naad (sound) like the sound a bell or a large gong makes. This is the meaning behind the Devi's name Chandraghanta, and the third day of Navratri is celebrated to honour this form of the Mother Divine.